Solenoid valves, or solenoids, are devices that convert electrical energy to mechanical energy, thereby creating a magnetic reaction; this occurs every time an electric current makes its way through the wire in the solenoid. When a device is forced into motion, the solenoid activates it. These devices are usually used to power fluid and hydraulic systems.

Solenoids have different functionalities; they can be used to start your car or activate your sprinkler system. The main function of a solenoid valve is to control the flow in fluid and air powered systems and motors.  These devices switch off, expel or mix fluids to power specific devices.

Let’s take a look at different types of solenoid valves. 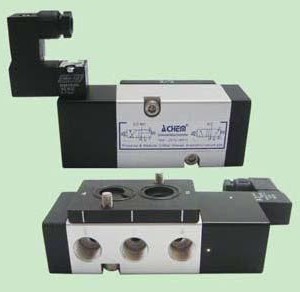 These solenoids have a coil that magnetically opens the valve in a direct action, causing the shaft and the seat of the valve to shift. Direct-acting solenoid Valves use the energy produced by the magnetic field of the solenoid to operate the valve. When the electrical current is removed, a mechanical spring returns the valve to its original position.

Direct-acting valves are utilised to prevent the development of too much pressure in a device.

In pilot-operated valves, the plunger opens up the pilot opening while the pressure causes the valve to open and close. In spite of the fact that pilot-operated valves require less electrical energy to work, need to keep up full power with a specific end goal to stay in an open state, and they perform at a slower rate than direct-acting solenoids. Direct-acting valves just need full power when opening the valve, as they can hold their vacant position notwithstanding when working on low power.

This is the most common type of solenoid valve. Two-way valves have two ports, which are used alternately to allow flow as well as close it off. A two-way valve can be “normally open” or “normally closed” in its operation. With a normally open valve, the valve remains open until a current is applied to close the valve. When the electrical power is suspended, the valve automatically reopens to its normal state. A normally closed solenoid valve remains closed until a power source causes it to open.

If you are looking for reliable solenoids, contact Switches International today.